Roberto was supposed to be at my hostel at 9am, sharp.  Thirty minutes late, which seems to be the standard here in Santiago, Roberto and I were on our way to San Antonio.  The drive is about 1.5 hours and takes you through a vertile valley of farms and vineyards.  Along the way, people were selling fruits and veggies...yes, on the side of the highway!  I noticed a sign that read, Brevas.  This is a new word for me and it means figs.  So, some of the farms that I was seeing, were fig tree's, and there were a lot of them.  Other than a good conversation with Roberto, the remaining part of the tip was scenic, but uneventful.

To the day, we arrived at the customs office, a week later.  I received my papers and we were out the door.  By now, my radar was on and before leaving, I doubled check the documents.  As it turned out the documents had the old New Hampshire license plate numbers on them.  This would have been a major problem, crossing the border.  Not to throw Roberto under the bus, he's a nice guy, but a bit forgetful (I told him 2 hours before that we need to change the plate number on the documents).  Add another ten minutes, waiting for the new documents, and we were out the door and at my truck.  She started immediately, but we still had the semi-flat tire and the brake issue.

The tire had just enough air in it to drive a short distance (no problem, there a gazzillion tire shops, just a short walk from the port...San Antonio is a major shipping port for new cars/trucks).  Oh, before I forget the tire had a nail/screw in it.  Now about them brakes?  In the past 6 days, I spent a lot of time researching brakes, and how to fix them.  I used Google and Youtube, and was amazed with the amount of info; very helpful info.  I also used Yahoo Answers, and received a fair amount of replies that confirmed what I read on Goolge and watched on Youtube.  I also reached out to friends back home and got much of the same info.  In the end this is what I did:


If you were paying attention above,  you noticed that I mentioned that the new brake line needed to be made. Specifically, the mechanic made the new line with his hands (hecho con manos).  Perhaps, this is an easy process, but I was pretty impressed, and at the same time, a bit worried with the ability of human to build a new brake line with their hands.  Evidently, making brake lines with only your hands, in South America, is like you and me buying milk at the store (it's common).  Throughout the process of fixing the brake line, what caught my attention the most was that the mechanic did not wear gloves and eye protection.  You see, DOT 3 brake fluid is highly corrosive.  As I watch this young kid work, I could see brake fluid spilling all over his hands and on occasion, falling into his eyes.  The brake fluid on his hands did not bother him a bit.  Perhaps the thick layer of oil and grease provides a protective barrier.  But, when the break fluid got into his eyes, he paused for a few seconds, shook it off, and got back to work.  Now to close this story, here is what amazes me the most; the bill cam to $20 USD ONLY.   My thoughts?  I did not force him to do anything that he would not do for his fellow countrymen.  But, this kids bathed in brake fluid for $20 USD...just crazy.  Think about this entire proces and now think about how USA mechanics charge about $80.00 per hour.  I can't imagine how much this would have cost in the USA....$150.00?

Next on the agenda?  Head back to Santiago!  But, true to the ways of South America, I was soon in another unexpected experience.  Roberto asked me if I wanted to get my truck washed...it was a bit filthy from the three weeks voyage at sea.  At this point, I mentally said to myself,  sure...why not.

We drove one block down the street to the local car wash.  Upon meeting the owner, he told me to pull my truck into bay #1 (as seen in the photo below).  Within seconds, he had a team of young kids washing my truck, both outside and inside. 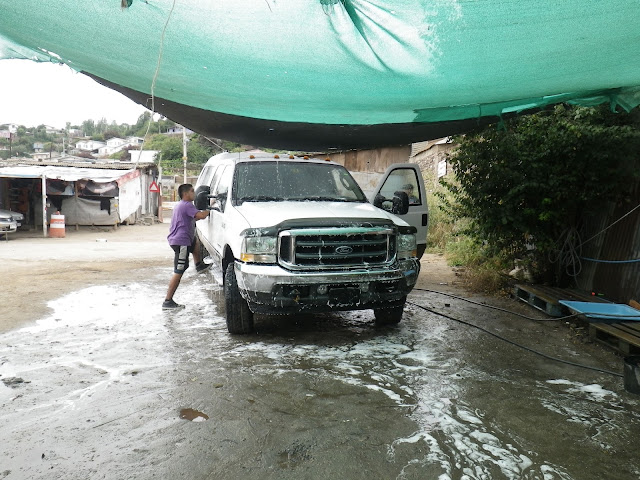 As I watched these guys wash my truck, I counted seven people, including me and Roberto. This triggered my brain to think and I  soon came up with an idea.  You see I had two roof racks in the back of the truck that need to be attached.  I had plan to drive the truck back to Santiago and recrute a few fellow travelers at the hostel, to help me attach the roof racks.  But, then I remembered the type of people staying at the hostel.  Not that they're bad people, but I quickly realized they are not the physical, get your hands dirty type.  So, plan B went into immediate effect: hire the wash crew to help me put the roof racks on the truck.  Twenty minutes later, as you can see from the picture above, the roof racks were attached, without scratching the paint.  On the contrary, Mark Seymour (all 6'5" ft) and I did this in the USA...it took longer and we scratched the paint.

Before I end the wash and roof rack story, if you notice the boy standing on the bumper, I have a brief note, worth mentioning.  During washing the car, he approached me and asked me if I was from the USA and if I spoke English.  Naturally, I  answered yes to both questions. He then spoke a few words in English.  I was impressed and thought it was very cool that he wanted to speak to me in English.  Unfortunately, we spoke but two sentiences in English and that was the end.  He then asked me for a propina (a tip).  I told him in Spanish that you must finish the work first before asking for a tip (kids...it's a global issue...everyone wants $$$ first, and work last).  I then told him that I would give him a propina grande (big tip) if he could ask the same question in English.  He said he could not, so I said, back to work and we'll talk about it when we finish.   When we finished, I paid the owner $5 Cl Pesos or $10 USD, and I gave the boys a $20 USD tip for doing a great job. That may seem like a small tip,  but they were all very happy.

Finally, I am off and driving back to Santiago, when it hit me...I am driving my truck in a foreign country, other than Canada!  What a strange feeling.  Not a bad feeling, but a good one, definitely a good one!   I approached my first toll booth, paid the fee and passed through successfully.  I soon found myself in Santiago and lost.  I guess I missed a turn or two.  My truck computer said I was driving south.  I knew I had to drive north-east (to the east is the mountains, and a good reference for my hostel location).  So,  I was on a heavily congested one way street.  It took me about 20 minutes of driving to get into the right lane, so I could turn around and head in the other direction (I could not turn left because it was prohibited, due to the bus lines in the middle of the road). So, I turned around, a few lefts and rights later, I was at my hostel.

More interesting tid-bits:  while driving my truck in San Antonia and Santiago, I got many, many looks.  Why? My truck, a F350 Diesel, may be the only truck of its kind in Chile.  The bottom line, even in the USA, this truck sticks out...it's all white and feak'n huge!  Back to our story in Chile;  on occasion, while stuck in traffic and few men ask me if I would like to trade cars.  I kindly declined and said thanks for the gesture.   It's nice to have a truck that people admire; hopefully my clients will appreciate the time and effort it took to get it here.  And for friends/family who said they may come visit, what are you waiting for...your bus awaits you.

I will be heading to Mendoza, Argentina soon.  The border pass is 10,000 ft, high in the Andes.  I also hear that there is summer road construction,  which now only allows people to pass into Argentina from 8pm till 7am (night crossing).  Good to have new brakes!

Hasta Argentina (yo espero).  Until Argentina, I hope!